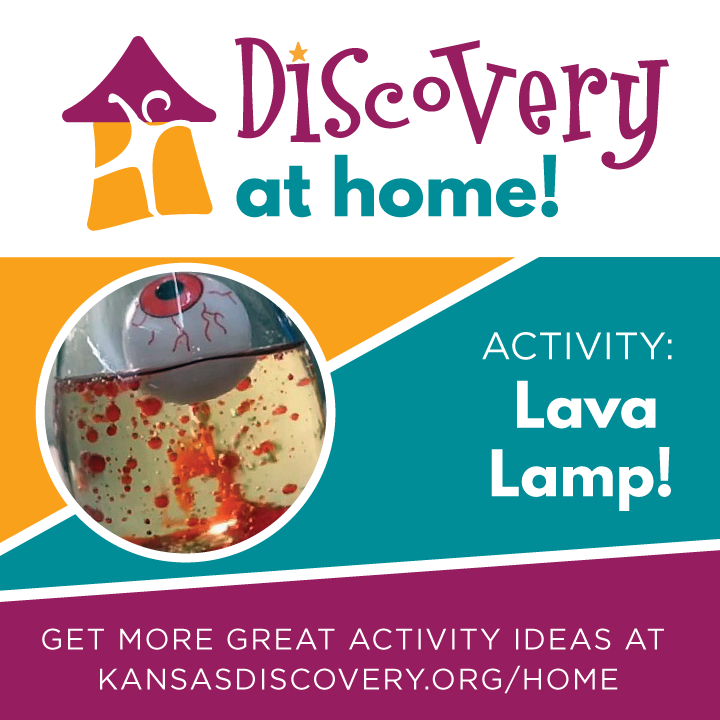 Looking for a spooky science experiment to do at home? You can make your own lava lamp at home with a few simple materials—no heat required! It’s a fun and easy way for you to learn about density and polarity. This spooky DIY project is sure to get you into the Halloween Spirit!

Here’s what you need: 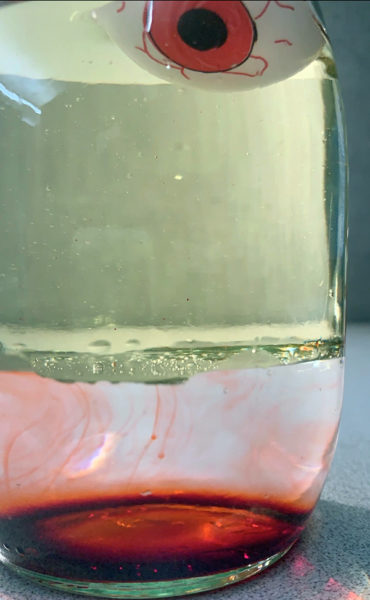 What did you observe? Was the reaction similar to your hypothesis?

Here are the answers to some questions you might have after doing this experiment:

Q: Why does the water sink to the bottom of the container and why does the oil float on top of the water?
A: Density is the way we measure how much something weighs compared to its size. If an item is small and heavy, it has a high density. If it is large and light, it has a low density. If two items take up the same amount of space, but one weighs more than the other, the heavier item is more dense than the lighter item.

In our experiment, we added water and oil to a container. Water is heavier than oil, so it is more dense. Oil is less dense than water because oil weighs less than water.

Oil and water have different densities, so when added to the same container, the oil floats in a layer on top of the water. However, density isn’t the only reason they don’t mix. Another important factor is polarity.

Water is what is known as a polar liquid. Water easily attracts and combines with other polar objects. Oil, however, is non-polar. Therefore, oil and water do not mix.

When the tablet is added to water, the baking soda is separated into sodium and bicarbonate. Now that the bicarbonate is split from the sodium, the bicarbonate reacts with the hydrogen in the citric acid, forming carbon dioxide.

The carbon dioxide is a product of the chemical reaction, and it causes the tablet to fizz and bubble. These carbon dioxide gas bubbles are less dense than oil and water, so they float to the top of the container.

Q: Why does the water separate from the oil again after the reaction?
A: When the carbon dioxide gas bubbles rise to the top of the container during the chemical reaction, they take some water up with them. When the bubbles reach the surface, they pop and are released into the air.

This is also what happens when you shake a bottle of soda. Carbon dioxide gas rises to the top of the soda bottle because the gas bubbles are less dense than the soda. Then when you open the bottle and release the pressure, the gas bubbles contact the air and are released.

We know that water is more dense than oil, so once the chemical reaction is over, the water will separate from the oil, sinking back down to the bottom of the container.

You can also use different methods for this experiment. Here are some other ideas for you to try: 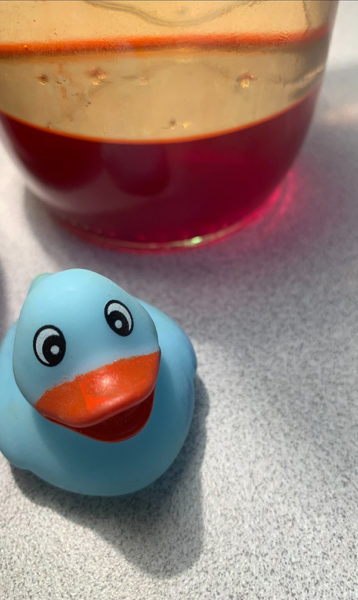 Drop other objects into the container to see if they sink or float. Here are some ideas for objects for you to test:

Discovery at Home: 12 Tips for More Meaningful (and fun!) Virtual Visits with Children

Tree Pose on the Move: Discovery at Home Kids and Family Yoga with Kathy Damron

Make a Mask for a Friend: Discovery at Home

Hot vs Cold: Discovery at Home

Making a Flipbook : Discovery at Home