Thanks to the generosity of the Lei family, and the hard work of some talented college students, the Discovery Center was able to replace its old pavilion with a New Years Pavilion that blends a beautiful yet informative design to help people of all ages learn about East Asian culture. A pavilion previously on the site was dedicated in 2013 with support from family and friends in memory of Garbo Lei. The new pavilion will enhance the existing Garbo Lei Family Treasure Garden.

Eighteen students from the University of Kansas School of Architecture worked together to design and build the pavilion, which included utilizing design elements that the donor had requested. The structure was built with wood, steel and terra cotta materials.

“A good detail we did is the center is the Chinese lunar calendar, so it’s got all twelve animals on it that (each) represent one year,” said Ashlyn Reece, a third-year student at the architecture school. 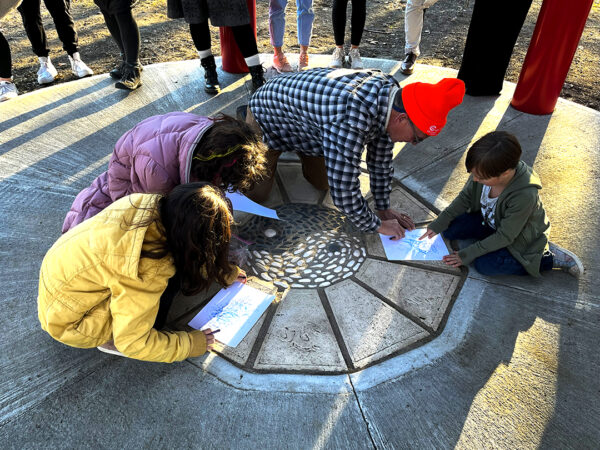 During a soft opening for the pavilion in December, several children got the opportunity to interact with the stone calendar, using paper and pencil to make prints of the different zodiac animals. In the middle of the twelve zodiac symbols is the yin-yang symbol, which in Eastern philosophy symbolizes the balance of the complementary forces that make up life, illustrating that there can be no positive without a negative and that two opposing halves are greater together as a whole. The pavilion officially opened to the public with a ribbon-cutting ceremony on Tuesday, Feb. 1.

“It was pretty heart-warming, seeing how kids just interact with it, because the previous pavilion you couldn’t really do that,” said Marcus Ross, also a third-year architecture student.

Another unique new feature to the pavilion is an acoustical dragon statue, which amplifies the sounds of running water from a nearby stream. Dragons have been part of East Asian culture for more than 4,000 years, according to the American Museum of Natural History. In Chinese culture, the mythical dragon — also a zodiac sign on the Chinese lunar calendar — represents good luck, strength and health. Dragons are also linked with yang, the masculine principle of heat, light, and action, and opposed to yin, the feminine principle of coolness, darkness, and repose. Dragons are also important mythical figures in the folklore of other East Asian countries such as Japan, Vietnam, South Korea and Borneo.

The red color scheme of the pavilion’s main pillars also matches the color of a bridge that goes over the stream and a nearby gong in the outside sound garden. The national color of China, red is connected to vitality, long life, happiness and success in Chinese culture.

The experience was a major learning opportunity for the students, many of whom had never used the equipment that was needed to construct the pavilion.

“It was a lot of surprises, because we’ve never really dealt with much construction, and so this was pretty much the first experience,” said Ross.

“It was really exciting,” Reece added. “I never used half of the tools…I learned how to stone carve, we welded some different parts of it, I’d never worked with tiles on a roof before, so it was just kinda cool to see something all the way to fruition (and) in a way that I had never worked before.”

KU associate professor Keith Van de Riet, who led the architecture students in planning and building the pavilion, said the project was fun but demanding for both the students and himself.

“You know, it’s an exciting semester,” Van de Riet said. “We had 18 individual authors coming together on a single project, so there’s a lot of coordination, there’s a lot of communication across the studio, which they’re not usually doing. They’re usually is smaller groups. So just kind of overcoming those kind of challenges is one of the biggest parts of the semester.

“And getting into the site work is incredibly difficult. We start digging and suddenly it’s a whole new ballgame.”

Despite its challenges, Van de Riet said having the opportunity to lead a group of young people on a project of this scale was a great experience for him as an educator, as well.

The architecture school has done fantastic work for the Discovery Center in the past, as well, including construction of The Reptilian Pavilion, a concrete and steel structure designed to honor the original Capitol Federal building that stood in downtown Topeka from 1924 until 1960.

Thank You, Blue Cross and Blue Shield of Kansas Volunteers!

In the News: Discovery Center and Briggs Partner to Serve Military Families

Check out 50+ free ways to entertain your kids in Topeka this summer!